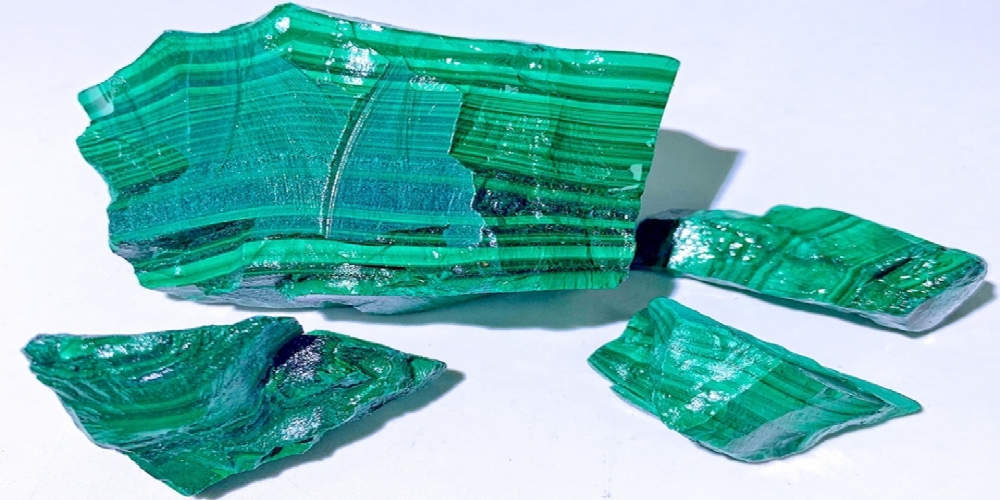 A raw malachite is a mineral of copper carbonate hydroxide. Its chemical composition is Cu2CO3(OH)2. It got its name from “malache”, ancient Greek for mallow (an herb plant), in reference to its colour and also “malakos”, meaning soft.

Malachite is a green gem which was discovered more than 4000 years ago across Egypt and Israel. It was used to create sculptures and ornaments. This gem has been seen in archeological remnants of the ancient Greeks, Egyptians and Romans. They used them for jewelry and amulets. It was also grinded down into pigments to make paints and cosmetics as some of the green paints at these archeological sites have been found to possess malachite pigments in them.

In recent times, Africa has become the primary source of Malachite. Malachite is now majorly found in the Democratic Republic of Congo with lesser amounts found in Australia, France and Arizona in the USA.

Malachite contains a high concentration of copper which is toxic to humans. During the cutting and polishing of malachite, malachite dust is formed. Serious health challenges can occur when this dust comes in contact with the skin, inhaled or ingested. Protective goggles, gloves and masks should be used when lapidary is carried out on malachite.

Malachite is deeply connected with the heart and throat chakras. It is believed to aid in the balance and alignment of these two chakras.

Its association with the heart chakra helps for love. It helps in unconditional love for yourself and others. It opens you up to receive love from others.

Its association with the throat chakra helps in freedom of speech. It helps you speak your truth and mind freely.

How to Know a Real or Fake Malachite?

Knowing a real or fake malachite can be confusing because it is one of the most faked crystals currently. Some producers will tag their jewellery as real when in truth, they’re offering fake malachite.

The first check is the price. Natural malachite does not come cheap. Synthetic ones can be offered up cheaply.

Another check is the patterns and colours. Natural malachite has a beautiful array of waves, rings, curls and stripes. The fake would mostly stick to only the stripes as it is the easiest to produce. Real malachite has a wide range of green. It varies from soft and light green colours to the dark shades of green. Sometimes it’s so dark, it looks black. The fake on the other hand, tends not to vary much with only about 2-4 shades of green available. It also has a clear contrast between them.

Real malachite has a cold touch and a heavy feel because of the presence of high copper content. Most of the synthetic malachite are produced for plastic or clay and therefore would be much lighter than a natural malachite.

Reconstituted malachite is a type of fake malachite produced by mixing crushed malachite waste with dyes or resin. Due to the mixture, it might look natural but it will be lighter than a real malachite.

Malachite has a lot of benefits such as helping your immune system, provide protection, relieve negative energy and strengthen overall physical well-being. The last thing you want to do is to invest in fake malachite, when they’re easy way to knowing the real raw malachite.

Charles usually likes to read some scientific and technological articles, in order to keep updated with the latest progress in human knowledge. However, he also adores reading books about adventures, mysteries, and survival stories. This helps him widen his perspective and get rid of the boredom that comes from a too-ordered life.

Which Lightning Cable Do You Need to Charge Your iPhone?

Ways to Protect Your Sneakers

Ways to Protect Your Sneakers